Jimmy Carter: a liar or a puppet president? 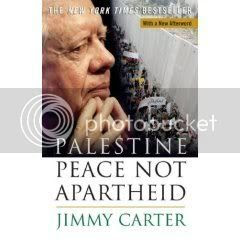 In this interview with former President Jimmy Carter, on amazon.com( Click here and scroll down to see interview ) about his book Palestine Peace Not Apartheid, his answer to this question

Q: What has been the importance of your own faith in your continued interest in peace in the Middle East?

A: As a Christian, I worship the Prince of Peace. One of my preeminent commitments has been to bring peace to the people who live in the Holy Land. I made my best efforts as president and still have this as a high priority.

But here is an interview with (National Security Advisor to President Carter) Zbigniew Brzezinski at http://www.globalresearch.ca/articles/BRZ110A.html (from Le Nouvel Observateur, Paris, 15-21 January 1998 )

According to the official version of history, CIA aid to the Mujahadeen began during 1980, that is to say, after the Soviet army invaded Afghanistan, 24 Dec 1979. But the reality, secretly guarded until now, is completely otherwise Indeed, it was July 3, 1979 that President Carter signed the first directive for secret aid to the opponents of the pro-Soviet regime in Kabul. And that very day, I wrote a note to the president in which I explained to him that in my opinion this aid was going to induce a Soviet military intervention.

That secret operation was an excellent idea. It had the effect of drawing the Russians into the Afghan trap and you want me to regret it? The day that the Soviets officially crossed the border, I wrote to President Carter. We now have the opportunity of giving to the USSR its Vietnam war. Indeed, for almost 10 years, Moscow had to carry on a war unsupportable by the government, a conflict that brought about the demoralization and finally the breakup of the Soviet empire.

In this article about the women of Afghanistan it says
from http://www.thirdworldtraveler.com/Women/RevolAfghanWomen.html

The USSR invaded Afghanistan in 1979 and occupied the country throughout the 1980s. The CIA hired the Mujaheddin (soldiers of God) to expunge the Communists from Afghanistan. The Mujaheddin were trained by Pakistan's Interservices Intelligence Directorate, and funded and armed by the U.S., Saudi Arabia, Egypt, France, Britain, Israel, Iran, Japan, and China. The U.S. spent $5 billion to support the rebels during the 1980s, and used Osama bin Laden, then an ally of the U. S ., to help recruit non-Afghan Muslims to the Mujaheddin.

RAWA has pointed out that there were several democratic-minded groups the U.S. and other countries could have supported if they had wanted to drive out the Communists and help restore independence to Afghanistan. Why did these countries instead back the fundamentalist Mujaheddin? RAWA member Sajeda told Said lt magazine in August that pro-democracy groups would have refused to act as "puppets" for other countries, and would have made it difficult for those countries to "maintain their economic and political interests in Afghanistan."

When the Soviet Union withdrew its army in 1989, the Mujaheddin, under the command of the despotic Gulbuddin Hekmatyar, and still funded by the U.S., began shelling Afghanistan's cities, killing thousands of civilians. After the Soviet's puppet regime collapsed in 1992, the country was seized by civil war. Tens of thousands of civilians were killed in rocket attacks. The Mujaheddin stopped women from working and attending health courses sponsored by non-government organizations (NGOs). Amnesty International reported that armed groups beat, raped, and murdered women in their homes. Young women were kidnapped as wives for commanders or sold into prostitution. Some committed suicide to avoid this fate, like one young woman who threw herself off a balcony in her house when soldiers came to kidnap her. In March 1994, a 15-year-old girl was repeatedly raped after soldiers killed her father for allowing her to go to school. Many people were victimized for belonging to a certain religious or ethnic group.

Thanx a lot, smelly BO, for everything.