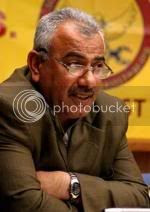 Faleh Abood Umara, General Secretary of the Southern Oil Company Union (affiliated with the Iraqi Federation of Oil Unions) worked for the Southern Oil Company in Basra for 28 years. Umara was detained by Saddam Hussein’s regime in 1998 for union activities. In the post-Saddam years he has worked on his union’s negotiating team with both the Oil Ministry and British occupation authorities, defending the rights of oil company workers. 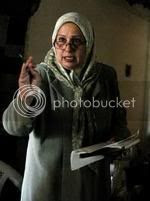 USLAW (U.S. Labor Against the War ) National Coordinator Michael Eisenscher introduced the speakers, pointing to the roots of Iraq labor unions in the country’s struggle against British imperialism, and the brave efforts of trade unionists under Saddam Hussein. Eisenscher noted that the June 2005 tour of Iraqi labor leaders USLAW coordinated (all three of the labor federations represented on that tour called for an end to the occupation in order to restore peace and end terrorism in Iraq) took place a month before a national meeting of the AFL-CIO, thereby helping achieve passage of a resolution by that U.S. labor body saying troops in Iraq “deserve a commitment from our country’s leaders to bring them home rapidly.” Eisenscher described this as the first time in its 50 year history that the federation took a position in opposition to a U.S. war while it was being waged, contrasting with unfortunate past history that earned it the label “AFL-CIA.” (The federation long served as an echo chamber for Washington’s cold war anti-communism, and helped facilitate brutal repression in Latin America and elsewhere.
.
.
.
Since the U.S. high command has announced that it will arm “Sunni insurgents,” allegedly to fight al-Quaida, after years of equipping Shia militias, it doesn’t take much effort to see how Washington might be contributing to fragmentation in Iraq. And as Iraq specialists Antonia Juhasz and Raed Jarrar wrote about the oil law on CounterPunch: “Many Iraqi oil experts are already referring to the draft law as the “Split Iraq Fund,” arguing that it facilitates plans for splitting Iraq into three ethnic/religious regions. The experts believe the law undermines the central government and shifts important decision-making and responsibilities to the regional entities. This shift could serve as the foundation for establishing three new independent states, which is the goal of a number of separatists leaders.”
Meanwhile, the Iraq oil law’s granting dominance to multinational oil giants behind the Bush Administration continues to be largely overlooked by the U.S. media and politicians in Washington. Instead, the mostly unquestioned spin from Washington is that the U.S. is working to heal divisions: UPI energy correspondent Ben Lando, who has written extensively about the oil workers’s strike, this week described Lt. Gen Martin as “the latest U.S. government official to push a common but false claim that the controversial draft oil law will lead to a just division of the proceeds from oil sales and pave the way for reconciliation in the war-torn nation.”
In fact, under the Iraq oil law still being negotiated, foreign oil giants stand to be the primary beneficiaries of those proceeds.
As Antonia Juhasz wrote, “The foreign companies would not have to invest their earnings in the Iraqi economy, partner with Iraqi companies, hire Iraqi workers or share new technologies. They could even ride out Iraq’s current “instability” by signing contracts now, while the Iraqi government is at its weakest, and then wait at least two years before even setting foot in the country. The vast majority of Iraq’s oil would then be left underground for at least two years rather than being used for the country’s economic development.
Complete article is at http://www.dissidentvoice.org/2007/06/iraq-union-leaders-speak-out-against-occupation/
Additional information at http://www.democracynow.org/article.pl?sid=07/07/06/1359232

hi
I used your comment in mideastyouth in my blog.
have a good time

I'll put a link to your post here so others will know what you are talking about.