The US has Returned Fundamentalism to Afghanistan 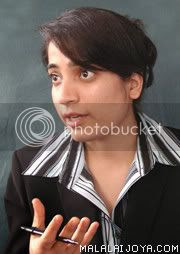 Here http://www.commondreams.org/archive/2007/04/12/468/ is a transcript of the speech given by Malalai Joya, member of the Afghan Parliament, at the University of Los Angeles on Tuesday April, 10th.

Here are two quotes from her speech.


Respected friends, over five years passed since the US-led attack on Afghanistan. Probably many of you are not well aware of the current conditions of my country and expect me to
list the positive outcomes of the past years since the US invasion. But I am sorry to tell you that Afghanistan is still chained in the fetters of the fundamentalist warlords and
is like an unconscious body taking its last breath.

The US government removed the ultra-reactionary and brutal regime of Taliban, but instead of relying on Afghan people, pushed us from the frying pan into the fire and selected its
friends from among the most dirty and infamous criminals of the “Northern Alliance”, which is made up of the sworn enemies of democracy and human rights, and are as dark-minded, evil, and cruel as the Taliban.

The Western media talks about democracy and the liberation
of Afghanistan, but the US and its allies are engaged in the warlordization, criminalization and drug-lordization of our
wounded land.

The gang-rape of young girls and women by warlords belonging to the “Northern Alliance” still continues especially in the northern provinces of Afghanistan. People have staged mass protests a number of times but no one cares about their sorrow and tears. Only a few of the rape cases find their way into the media. One shocking case was that of 11 year old Sanobar, the only daughter of an unfortunate widow who was abducted, raped and then exchanged for a dog by a warlord. In a land where human dignity has no price, the vicious rapist of a poor girl still acts as district chief.

The only protests in Afghanistan the mainstream media reports on are the ones involving the abuse of the Quran or those Muhammed cartoons. Much of the mainstream media does not care to portray Muslims as human beings, who have the same concerns as everyone else. How much attention has Malalai Joya gotten in the mainstream media or from Western feminists? It is because she criticizes both U.S. military actions and the Taliban that she is not well known.
Posted by RandallJones at 8/10/2007 10:37:00 PM

There is no University of Los Angeles, there is UCLA though.

Yes it is supposed to be UCLA. See the website of the student newspaper.
http://www.dailybruin.ucla.edu/news/2007/apr/11/concerted_call_action

Joya emphasized that it is up to her country to liberate itself from criminal rulers, but the pressure other countries such as the U.S. can put on its politicians to help remove them as well can still be extremely crucial to the development of democracy in Afghanistan."

I didn't put the link to Malalai Joya's website correctly in my previous comment. Here it is