This is the cartoon of the first place winner, Morracon Derkaoui Abdellah. To see the other winners go to http://www.irancartoon.com/120/holocaust/index.htm 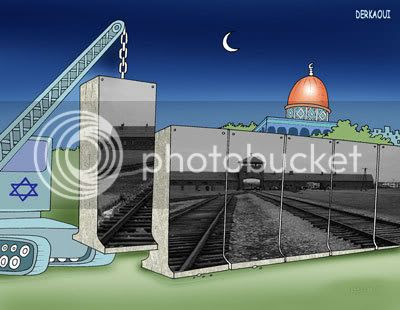 The Holocaust is not the only time a large number of people have died, 3 to 5 million died when the U.S. bombed Vietnam and Cambodia. Millions have died in the Congo and the surrounding countries. The Western media likes to portray it just as tribal and ethnic war fare and they leave out the role of the United States and Israel in fueling the war through political interventions and selling weapons to both sides of the conflicts. In the meanwhile, they exploit the diamonds, minerals and natural resources of the region. Will we ever find out the true number of Iraqis killed as a result of the two invasions and sanctions? The Iraqis are scapegoats for U.S. foreign policy. The U.S. helped Saddam Hussein into power and supported him, financially and strategically, when he was committing his worst atrocities.

Regarding the cartoon controversy, one of the commentators and the web administrator at http://samsonblinded.org/blog/a-cartoon-for-a-cartoon.htm discuss that to get back at Muslims they should make cartoons that show the prophet of Islam as a pedophile. I tried to post a comment that shows the cartoons of the winner of the Iranian contest and I also mentioned a book that discusses Jewish scriptures that makes it acceptable to perform sexual acts on three year olds and younger. But the administrator did not allow my comment to be posted. The name of the book is called Judaism’s Strange Gods by Michael Hoffman. I will quote part of it here. On page 51 it says

Sexual Intercourse with Little Girls is Permissible
Ketubot lIb: "If a grown-up man has intercourse with a little girl, it is nothing, for having intercourse with a girl less than three years old is like putting a finger in the eye."
Though the Talmud's permission for the heinous crime of child molestation is virtually unknown among the public and is never mentioned in the establishment media, among Talmud researchers it is notorious.
This portion of tractate Ketubot concerns Halakhic definitions of sexual intercourse. In this particular ruling it is stated that copulation with girls below the age of three cannot be considered sexual activity because, although penetration ruptures her hymen, such intercourse is merely "like putting a finger in the eye," since the hymen at this age will eventually regenerate (just as a finger stuck in an eye will cause the eye to water, yet the eye will heal and return to its former state, so the hymen of a girl under three will rupture during intercourse but will heal later).
Once her hymen grows back, the little girl is regarded as lawfully still a virgin. Hence the Talmud recognizes no sexual intercourse as having occurred and therefore exacts no penalty for coitus with a female child of less than three years of age.

Randall, I appreciated your links on the Angry Arab site. The one by Keith Harmon Snow and Dimitri Oram is quite clear and informative. Plus, I personally like the cantor of the writing. I want to post the information in full on my site and will give full credit not only to the original source but to you for pointing it out. Thanks

Great!
You can hear Keith Harmon Snow speak about "AFRICOM and the U.S. Resource Wars in Africa" at http://www.kpfa.org/archives/index.php?arch=20604

I have commentary about the exploitaton of photographs of war refugees; I make a comparison of Afghanistan and Sudan at http://gettingtruth.blogspot.com/2007/05/first-image-is-cover-of-book-about.html

I think it's disgusting that the Nazi holocaust is used to justify illegal war. Now that the USA is about to strike Iran, they're using the Nazi holocaust as a morale tool to build up support. "Ahmadinejad is the next Hitler and he wants to kill all the Jews, so of course we MUST invade Iran" - bullshit.