Pool of water estimated to have sprawled over nearly 12,000 square miles 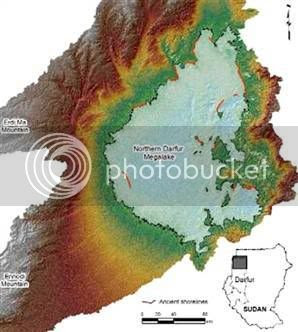 Scientists using radar techniques have peeled away the sandy cloak blanketing Darfur’s parched landscape to reveal an ancient basin that once housed a mega-lake larger than Lake Erie.

“When you go into these deserts and you look at the land, it’s so dry and lifeless you think there has never been anything alive there. Then you look in the past, and you see there were rivers and lakes,” said study team member Farouk El-Baz, director of Boston University Center for Remote Sensing.

Dubbed the Northern Darfur Mega-lake, the large pool of water is estimated to have sprawled over nearly 12,000 square miles during its heyday, with 600 cubic miles of water when filled to the brim.

Hidden pool
El-Baz and his colleague Eman Ghoneim, also of the Center for Remote Sensing, discovered the lake by analyzing images from the satellite Radarsat, which used radar waves to penetrate the fine-grained sand in western Sudan, revealing the hidden contours of the lake basin and surrounding rivers.