Cindy Sheehan will run against Congresswomen Nancy Pelosi in 2008 if she does not file articles of impeachment against Bush by July 23.

I have come to some heartbreaking conclusions this Memorial Day Morning. These are not spur of the moment reflections, but things I have been meditating on for about a year now. The conclusions that I have slowly and very reluctantly come to are very heartbreaking to me.

The first conclusion is that I was the darling of the so-called left as long as I limited my protests to George Bush and the Republican Party. Of course, I was slandered and libeled by the right as a “tool” of the Democratic Party. This label was to marginalize me and my message. How could a woman have an original thought, or be working outside of our “two-party” system?

However, when I started to hold the Democratic Party to the same standards that I held the Republican Party, support for my cause started to erode and the “left” started labeling me with the same slurs that the right used. I guess no one paid attention to me when I said that the issue of peace and people dying for no reason is not a matter of “right or left”, but “right and wrong.” 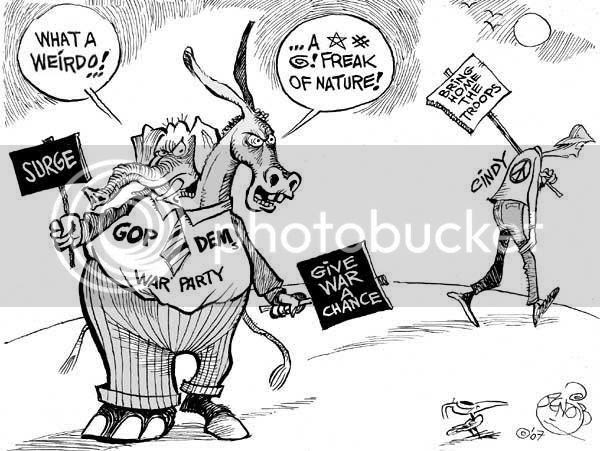 Click here for larger image
The cartoon is by Khalil Bendib who has recently released a book (Mission Accomplished Click Here to See it) which contains a collection of his cartoons
Posted by RandallJones at 7/18/2007 01:27:00 AM