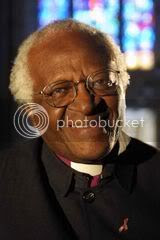 A private Roman Catholic college in Minnesota has shelved plans to invite Nobel laureate Desmond Tutu to speak, fearing that his views on the Israeli-Palestinian conflict will offend the Jewish community, a school official said.

University of St. Thomas officials had initially considered having the South African bishop address students in April, but comments in which he compared Israel's treatment of the Palestinians to the plight of blacks under South Africa's apartheid regime were deemed too insulting by the local Jewish community, said Dough Hennes, vice president for university and government relations.

Hennes told local newspapers for stories Thursday story that the university does not believe Tutu is anti-Semitic. But he cited a 2002 speech in which he said Tutu criticized "the Jewish lobby." Hennes also said Jewish groups feel Tutu has compared the Israeli policy toward Palestinians to how Adolf Hitler treated Jews.

Archbishop Desmond Tutu needs to remind Jewish groups about how Israel helped give apartheid era South Africa its nuclear capabilities. (see http://www.thirdworldtraveler.com/Global_Secrets_Lies/Israel_SAfrica.html )
He also needs to remind Israel about what it is doing in the Congo.

Over the past 50 years, top Israeli and Belgian diamond dealers have perpetrated conflict and injustice in Africa, fueled by and for diamonds. According to a report by the American Jewish Committee: after 1980 “Mossad agents, military emissaries, and a small group of private businessmen…replaced diplomats as Israel’s main interlocutors with African leaders and political (mainly opposition) groups.” The report cites rising involvement of private defense and security interests, especially in Angola, the Democratic Republic of Congo (DRC), and Central Africa Republic, since 1992.

Retired Israeli Defense Forces Colonel Yiar Klein reportedly organized arms for diamonds networks in Sierra Leone and Liberia after President Charles Taylor was deposed. President in 1997, Taylor was imprisoned in Massachusetts in 1984 for embezzlement in Liberia, but escaped mysteriously. He was close with President Blaise Compaoré of Burkina Faso, which is Israel’s base of operations in Africa and a conduit for illegal stones. Yar Klein violated the UN embargo by trading arms for diamonds from the Revolutionary United Front (RUF), the rebels who chopped people’s hands off. In 1999 Klein was arrested in Sierra Leone on charges of smuggling arms to the RUF; transactions went through Ibrahim Bah, a Senegalese soldier of fortune and purported Al Qaeda businessperson.


Update: St. Thomas president reverses earlier stance on Nobel prize winner
see http://www.msnbc.msn.com/id/21247990/
I still think Desmond Tutu needs to speak to Israel about its relationship with apartheid era South Africa, as well as its current role in the genocide in the Congo. Actually, he needs to talk to America about these issues, as well.
Posted by RandallJones at 10/06/2007 05:07:00 PM