Arabic School Ex-Principal Fights to Get Job Back 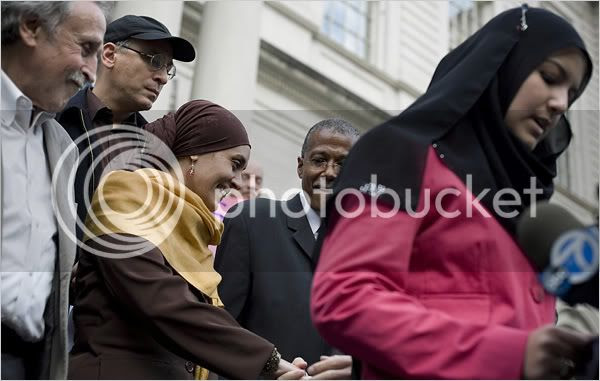 Those who do not live in New York Cit,y may not be aware of the new Khalil Gibran International Academy, a public school where the Arabic language and culture are included in the curriculum.. The principal was going to be Debbie Almontaser (women in photo, on the left), a Yemeni immigrant. At the start of the school year She was replaced by Danielle Salzberg, a Zionist who does not speak Arabic.

Almost from the time the Education Department announced plans for the school in February, it faced opposition from parents at public schools that were to share their space with the Arabic-culture school, as well as from conservative columnists, who said the school would promote radical Islam.

The controversy that ultimately lead to Ms. Almontaser’s resignation began in early August, when she faced questioning from The New York Post over the phrase “Intifada NYC,” which was printed on T-shirts sold by Arab Women Active in the Arts and Media, a Brooklyn-based organization. The shirts had no relation to the school. She said that the word “intifada,” — which is commonly used to refer to the Palestinian uprising against Israel — literally meant “shaking off” and did not only suggest violence.

Yesterday, Ms. Almontaser said that Education Department officials had forced her to speak to the reporter and then, not satisfied with her answer, demanded that she write an apology

While New York City’s Mayor Michael Bloomberg, Schools Chancellor Joel Klein, and Teachers Union President Randi Weingarten condemned Ms. Almontaser for defending the phrase "Intfida New York," they had nothing to say about the article at the website of the newspaper of the NYC United Federation of Teachers ( http://www.uft.org/news/teacher/around/irish_duo/ ) were it refers to the terrorists of Hagannah as freedom fighters.

He later became a stakeholder for the Hagannah, a defense lawyer for Jewish gun-runners and had his brother, Mayor William O'Dwyer, call off a police detail from the docks so guns could be sent to Israel.
... [caption of photo] Manhattan attorney Brian O’Dwyer (left), who told a vignette about his father defending Israeli freedom fighters caught with guns in Manhattan; with Joel Shiller (center), chair of the UFT Jewish Heritage Committee, and Callaghan.

Here is some of what the Hagannah did to the Palestinians

Not only did they terrorize the Palestinians, they also terrorized Jews. There is a book by Naeim Giladi called Ben Gurion's Scandals: How the Haganah & the Mossad Eliminated Jews. Read about it here http://www.bintjbeil.com/E/occupation/ameu_iraqjews.htm

Update: Here is a blog that gives updates about Debbie Almontaser and the Khalil Gibran International Academy (KGIA) http://kgia.wordpress.com
Posted by RandallJones at 10/20/2007 02:59:00 AM

Arabs can't be trusted for anything at all- certainly not to "educate" young, impressionable children.

With the emabarassingly low math and reading scores of NYC students, despite huge sums of money invested in the education system, the non-Arabs haven't been doing a very good job educating our children.

I bet you had no problem with jihadis who fought the United States' proxy war against the Russians. The defeat of the Russians facilitated the breaking up of the Soviet Union, resulting in the United States becoming the number one super power in the world. In the meanwhile, millions of Afghans had been killed and the country had been left in ruins.

The United States could have chosen pro-democracy groups to work with but chose to recruit and train extremists that would do their bidding. I discuss this here http://gettingtruth.blogspot.com/2007/08/in-this-interview-with-former-president.html