Some blogs and forums have made a comparison between how the media reports on the violence of the peoples in Tibet and Palestine. There is not only a difference in the media coverage of the violence, but also on the reporting of negative aspects of each society. Zionists will often report on the most negative historical and "cultural" aspects of Palestinian society, as if though this justifies the oppression and violence that Israel inflicts upon them. There is hardly, if any reporting about the negative historical and cultural aspects of Tibetan society. Here is an article by Michael Parenti that discusses Tibet before China. http://www.michaelparenti.org/Tibet.html 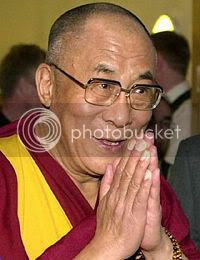 Here is an excerpt from the article:

Young Tibetan boys were regularly taken from their peasant families and brought into the monasteries to be trained as monks. Once there, they were bonded for life. Tashì-Tsering, a monk, reports that it was common for peasant children to be sexually mistreated in the monasteries. He himself was a victim of repeated rape, beginning at age nine. 14 The monastic estates also conscripted children for lifelong servitude as domestics, dance performers, and soldiers.

In old Tibet there were small numbers of farmers who subsisted as a kind of free peasantry, and perhaps an additional 10,000 people who composed the “middle-class” families of merchants, shopkeepers, and small traders. Thousands of others were beggars. There also were slaves, usually domestic servants, who owned nothing. Their offspring were born into slavery. 15 The majority of the rural population were serfs. Treated little better than slaves, the serfs went without schooling or medical care, They were under a lifetime bond to work the lord's land--or the monastery’s land--without pay, to repair the lord's houses, transport his crops, and collect his firewood. They were also expected to provide carrying animals and transportation on demand.16 Their masters told them what crops to grow and what animals to raise. They could not get married without the consent of their lord or lama. And they might easily be separated from their families should their owners lease them out to work in a distant location. 17

As in a free labor system and unlike slavery, the overlords had no responsibility for the serf’s maintenance and no direct interest in his or her survival as an expensive piece of property. The serfs had to support themselves. Yet as in a slave system, they were bound to their masters, guaranteeing a fixed and permanent workforce that could neither organize nor strike nor freely depart as might laborers in a market context. The overlords had the best of both worlds.

One 22-year old woman, herself a runaway serf, reports: “Pretty serf girls were usually taken by the owner as house servants and used as he wished”; they “were just slaves without rights.”18 Serfs needed permission to go anywhere. Landowners had legal authority to capture those who tried to flee. One 24-year old runaway welcomed the Chinese intervention as a “liberation.” He testified that under serfdom he was subjected to incessant toil, hunger, and cold. After his third failed escape, he was merciless beaten by the landlord’s men until blood poured from his nose and mouth. They then poured alcohol and caustic soda on his wounds to increase the pain, he claimed.19

The serfs were taxed upon getting married, taxed for the birth of each child and for every death in the family. They were taxed for planting a tree in their yard and for keeping animals. They were taxed for religious festivals and for public dancing and drumming, for being sent to prison and upon being released. Those who could not find work were taxed for being unemployed, and if they traveled to another village in search of work, they paid a passage tax. When people could not pay, the monasteries lent them money at 20 to 50 percent interest. Some debts were handed down from father to son to grandson. Debtors who could not meet their obligations risked being cast into slavery.20

The theocracy’s religious teachings buttressed its class order. The poor and afflicted were taught that they had brought their troubles upon themselves because of their wicked ways in previous lives. Hence they had to accept the misery of their present existence as a karmic atonement and in anticipation that their lot would improve in their next lifetime. The rich and powerful treated their good fortune as a reward for, and tangible evidence of, virtue in past and present lives.

The Tibetan serfs were something more than superstitious victims, blind to their own oppression. As we have seen, some ran away; others openly resisted, sometimes suffering dire consequences. In feudal Tibet, torture and mutilation--including eye gouging, the pulling out of tongues, hamstringing, and amputation--were favored punishments inflicted upon thieves, and runaway or resistant serfs. Journeying through Tibet in the 1960s, Stuart and Roma Gelder interviewed a former serf, Tsereh Wang Tuei, who had stolen two sheep belonging to a monastery. For this he had both his eyes gouged out and his hand mutilated beyond use. He explains that he no longer is a Buddhist: “When a holy lama told them to blind me I thought there was no good in religion.”21 Since it was against Buddhist teachings to take human life, some offenders were severely lashed and then “left to God” in the freezing night to die. “The parallels between Tibet and medieval Europe are striking,” concludes Tom Grunfeld in his book on Tibet. 22

In 1959, Anna Louise Strong visited an exhibition of torture equipment that had been used by the Tibetan overlords. There were handcuffs of all sizes, including small ones for children, and instruments for cutting off noses and ears, gouging out eyes, breaking off hands, and hamstringing legs. There were hot brands, whips, and special implements for disemboweling. The exhibition presented photographs and testimonies of victims who had been blinded or crippled or suffered amputations for thievery. There was the shepherd whose master owed him a reimbursement in yuan and wheat but refused to pay. So he took one of the master’s cows; for this he had his hands severed. Another herdsman, who opposed having his wife taken from him by his lord, had his hands broken off. There were pictures of Communist activists with noses and upper lips cut off, and a woman who was raped and then had her nose sliced away.

Here is a video by Chris Nebe about the history of Buddhism in Tibet.

Here is a viewpoint about the Tibet riots that says both Western and Chinese media is not telling the complete truth. You be the Judge!

Here is the same guy giving an "Unbiased history of Tibet."