Bombs Away Over Iraq

A January 21st Los Angeles Times Iraq piece by Ned Parker and Saif Rasheed led with an inter-tribal suicide bombing at a gathering in Fallujah in which members of the pro-American Anbar Awakening Council were killed. ("Asked why one member of his Albu Issa tribe would kill another, Aftan compared it to school shootings that happen in the United States.") Twenty-six paragraphs later, the story ended this way:

"The U.S. military also said in a statement that it had dropped 19,000 pounds of explosives on the farmland of Arab Jabour south of Baghdad. The strikes targeted buried bombs and weapons caches.
"In the last 10 days, the military has dropped nearly 100,000 pounds of explosives on the area, which has been a gateway for Sunni militants into Baghdad."

And here's paragraph 22 of a 34-paragraph January 22nd story by Stephen Farrell of the New York Times:

"The threat from buried bombs was well known before the [Arab Jabour] operation. To help clear the ground, the military had dropped nearly 100,000 pounds of bombs to destroy weapons caches and I.E.D.'s."

Farrell led his piece with news that an American soldier had died in Arab Jabour from an IED that blew up "an MRAP, the new Mine-Resistant Ambush-Protected armored vehicle that the American military is counting on to reduce casualties from roadside bombs in Iraq."
Note that both pieces started with bombing news -- in one case a suicide bombing that killed several Iraqis; in another a roadside bombing that killed an American soldier and wounded others. But the major bombing story of these last days -- those 100,000 pounds of explosives that U.S. planes dropped in a small area south of Baghdad -- simply dangled unexplained off the far end of the Los Angeles Times piece; while, in the New York Times, it was buried inside a single sentence.

Neither paper has (as far as I know) returned to the subject, though this is undoubtedly the most extensive use of air power in Iraq since the Bush administration's invasion of 2003 and probably represents a genuine shifting of American military strategy in that country. Despite, a few humdrum wire service pieces, no place else in the mainstream has bothered to cover the story adequately either.
Continued at http://www.uruknet.de/?p=m40642&hd=&size=1&l=e 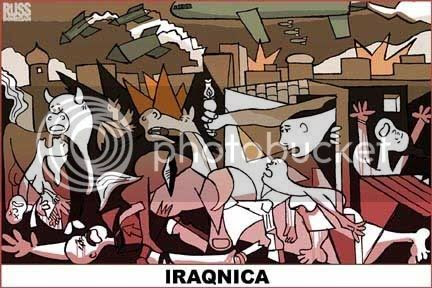 Note: the article mentions what happened in 1937 Guernica; here is an article that points out that Western countries were already bombing Arab and Muslim countries before 1937. See http://www.brushtail.com.au/july_04_on/bombing_arabs_history.html
Posted by RandallJones at 1/30/2008 09:14:00 PM