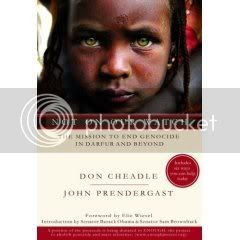 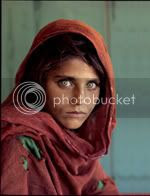 The first image is the cover of a book about Sudan. The second image is of an Afghan girl from the cover of 1985 National Geographic magazine

I couldn't help noticing the similarity in their eyes and the simliarity in their situation. The photo of the Afghan girl was exploited commercially all over the world, but what good did it do to help the people of Afganistan?


She was one of the world's most famous faces, yet no one knew who she was. Her image appeared on the front of magazines and books, posters, lapel pins, and even rugs, but she didn't know it. Now, after searching for 17 years, National
Geographic has once again found the Afghan girl with the haunting green eyes. from http://news.nationalgeographic.com/news/2002/03/0311_020312_sharbat.html

Sure there are charities that "help" the Afghan people but nothing to stop the mass bombings and occupation of Afghanistan by the United States. No acknowledgement of the millions who died during the Afghan-Russian war.

The same is being done with Sudan. The picture of the Sudanese child is from the cover of a book called "Not On Our Watch" by Don Cheadle and John Prendergast. John Pendergast is on the Board of Directors of SaveDarfur.org

The two authors were recently interviewed on Democracy Now http://www.democracynow.org/article.pl?sid=07/05/03/1357220 .

Copy and paste the long url below (written in BOLD) in a new window for a scathing commentary by Keith Harmon Snow about the interview. He is angry about the fact that Amy Goodman did not bring up the past and current role of John Prendergast in Africa.

Here is an article by F. William Engdahl about "China and USA in New Cold War over Africa’s oil riches"